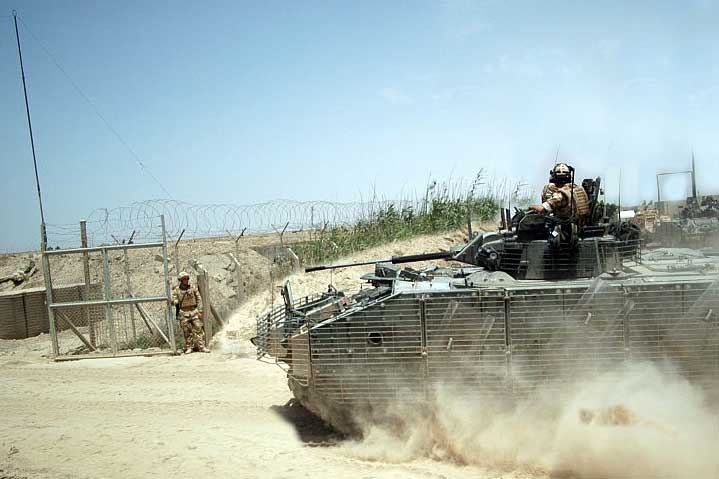 I WOKE WITH a bump. The concussion from the huge mortar bomb ripped through the hot, quiet, night air with an almost visible compression and was followed a split second later by a raw vicious ‘boom’.  I rolled off the bed through the mosquito net, collecting my carbine, helmet and body-armour and crawled across dusty tiles to the absurd cover of my makeshift desk three metres away. The steel door hung drunkenly on one rusty hinge. I could see the camp beyond. Nothing. No light. No flames. No running men. Surreal. And then I smelt the acrid burn of explosive and the first scream pierced the silence.

Alone in the dust and darkness, I donned both hat and heavy gilet – hands shaking in haste or fear – pulling the big Velcro straps tight to my torso and fixing in place the bullet proof plates that protected the heart both from the front and the rear. The scream became screams, seemingly muffled and far away. Kneeling naked, but for a hat and plated vest, under a plywood table and corrugated tin roof, I rationalised what might be taking place ‘out there’. The screams probably fear, not wounds. I hoped. Fear is contagious. I tried to compose myself as the mortar warning finally sounded. Really? Now? You don’t think we noticed?

Breathe. And then another whining whistle. An evil, wicked sound; part hiss, part fizz and all malevolence. I scrunched my eyes closed as the sound stopped, and started counting. One thousand, two thousand…. at four the air was corrugated for a moment. Then came the thunderclap. Phew. If you hear the boom you are still alive. Explosion after explosion followed. Now there was no silence.  Just a rising soundtrack of pain both real and anticipated.